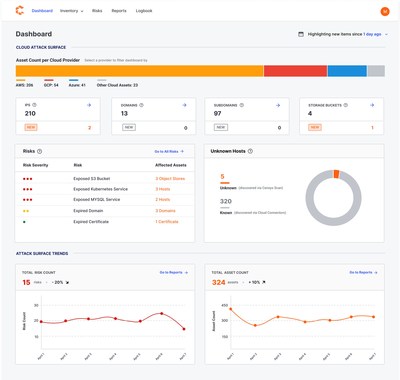 Data breaches have become an increasingly commonplace incident in the modern enterprise, and the role of the cloud in its growing prevalence is undeniable. “We recently analyzed our own Universal Internet DataSet and found 2 million database exposures across the most common cloud providers, as well as 1.9 million RDP exposures,” said Censys’ Security Research Lead, Megan DeBlois. “We know that database exposures lead to data breaches, and past research has shown that RDP accounts for 70-80% of network breaches.”

Increasing concern from customers and our internal research pushed Censys to address the underlying lack of cloud visibility that is causing these risks. Many of our customers used CSPM, CASB, and CWPP platforms, but these only monitor known cloud accounts. Customers can now continually discover cloud assets and risks ranging from unknown cloud accounts and providers to unmanaged cloud storage buckets, thereby eliminating security blindspots and resolving some of the Internet’s most alarming risks.

“Most Fortune 500 companies have hundreds of cloud accounts. While some are managed through cloud security tools, many are simultaneously created by non-IT groups and don’t have technical controls to prevent a breach,” said Censys Co-Founder Zakir Durumeric. “Security teams are left with a huge environment to protect, but are blind to many of their riskiest accounts.”

Unmanaged cloud accounts  can contain an organization’s riskiest assets. “One of our customers thought they had just 800 hosts in their attack surface, but after connecting their AWS accounts to Censys Cloud Security, we inventoried a total of 1,439 – nearly an 80% increase. This discovery revealed 60 exposed protocols and end-of-life software risks on otherwise unknown assets,” said Durumeric. “In order to maintain compliance and avoid security breaches, it is imperative to have comprehensive and continual cloud asset discovery for all assets regardless of the cloud account or provider.”

In addition, discovery of new cloud asset types such as storage buckets have provided immediate value to customers. “A significant problem that remains is dealing with data loss from misconfigured databases and buckets, which has resulted in numerous data loss events over the years,” said Derek Abdine, CTO at Censys. “Censys has added storage bucket discovery after overwhelming demand from customers. After switching on the feature with one customer, we found 18 exposed buckets, one with a completely configurable access control list. That means anyone on the Internet could have changed the settings and accessed the data.”

Using Censys Cloud Security, teams can finally get full visibility of their cloud footprint across all providers and deployment models, reduce their attackable surface area by shutting down shadow IT, and meet compliance objectives in the cloud.

Censys, Inc.™ is the leading provider of continuous attack surface management. Founded in 2013 in Ann Arbor, Michigan, Censys gives organizations the world’s most comprehensive real-time view of global networks and devices. Customers like FireEye, Google, NATO, Swiss Armed Forces, the U.S. Department of Homeland Security, and over 10% of the Fortune 500 rely on the company’s Internet-wide continuous visibility platform to discover and prevent cybersecurity threats. Censys was recognized by CB Insights as a 2019 Cyber Defender for pioneering technology with the potential to transform the cybersecurity industry. To learn more, visit censys.io and follow Censys on Twitter.